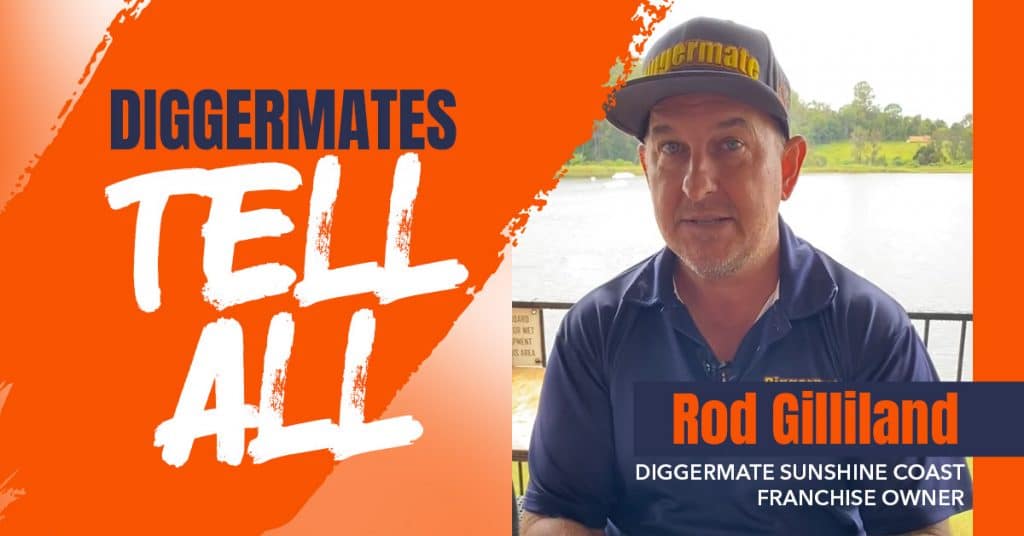 In this video, Diggermate franchise owner Rod Gilliland tells all: how he found Diggermate, his initial concerns, his Diggermate journey so far, who they would recommend Diggermate to — and more!

How did you find out about Diggermate?

It was pretty interesting. We’re a landscaping business–coastal landscaping on the sunshine coast–and maintenance. So we’re sick of hiring from the Diggermate owner (franchise owner–even though she was a lovely lady). So we actually just prompted the question one day. “Gee, if you ever think about selling this, let us know.” And she’s all, “funnily enough we are.”

So we looked into it. Everyone was telling us, all the financial guys were telling us, “Yeah, jump on this, it’s quite good.” I wish we did, and we sort of did our own due diligence, if that’s the word, to find out what we could, and everything started going the right direction. We looked at it from an existing business point of view, and we’re really good at making landscape jobs, gardens, retaining walls, [but] we don’t have marketing. This business had a great product, but also great marketing. We combined the two together because when you’re doing one you can’t [not] do the other. Combine them together, and.. success. And we’ve sort of had a look back, we’re actually looking at expanding even more. We want to do a satellite branch up in our northern area.

What were your initial concerns about Diggermate?

It’s like any franchise, I suppose. The biggest concern is how much they’re going to take, and what they’re gonna give back. So if you look at that, it’s the same as buying a piece of machinery; you know what it’s going to make for you, as compared to how much it costs. When we looked at that, those aspects, it was quite reasonable. The franchise fee [is] quite reasonable when you actually add on everything you get in the back end. The support you get and the marketing is just.. 👍 (don’t put up your franchise fee just because I said that). But yeah, the return on investment is far in the franchisee’s favour.

What specific benefits have you received?

Just a repeat business, the turnover of clients, the leads, one after another. What we like is the new initiatives. They’re not just sitting back going, “Well, this is who we are and that’s it.” It’s consistent improvement, I mean that’s what we’re all about. But I think this franchise shows that commitment, and the way to show it is [to] demonstrate it. And we’ve seen that already.

Who would you recommend Diggermate to?

Oh, that’s an interesting one. Any existing business, any existing–particularly from my aspect–landscaper. Anyone in the outdoor area, potentially someone that already has excavators. So that they’ll be in the same situation as we were, great at what they do, but not good at marketing. So it’s a no-brainer. So that process–we keep talking about side hustle–you’ve got to be careful. Because that side hustle quite quickly can grow into a full-on enterprise, so it’s up to you. You can do either, so really, there’s no limitations. Just basic mechanical skill, [and you] need to be able to answer your phone and communicate with people. Other than that, the world’s your oyster.