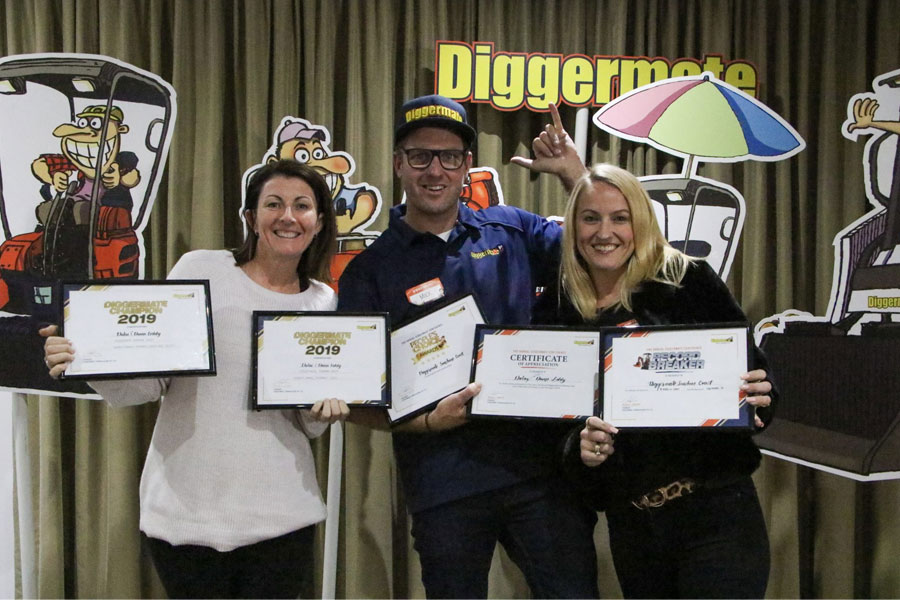 When Dalai Liddy saw Diggermate kick off in 2015, she knew she had to be a part of it. As a mum of two and the wife of a shift working paramedic, life was already busy. But add to that her job at the coffee shop for 10 hours a day and life was chaotic to say the least.

Her day consisted of a “ridiculous o’clock” in the morning start, a full day making coffee and running the coffee shop to finish just in time to pick the kids up from school in the arvo. The responsibility of getting the kids to school often fell on other family, friends and neighbours, or she would drag the kids along to the early starts at the coffee shop. It made for some cranky kids, a more cranky wife and a husband that also felt the enormity of the daily grind. “It was chaos, I had zero time for anything, not the least of which was looking after my family and having a fun life with my kids” Dalai explained.

When founder of Diggermate franchise, Mick Watkins kicked off his excavator hire business,  Dalai watched intently. Having worked with Mick in previous years on events and marketing campaigns they had run together in their earlier life, she admits she just wanted to run off the back of systems that were implemented during the business inception. “When I worked with Mick in the past I loved the way his brain worked, he is great at thinking outside the box, and he can put some really good systems together. So as I saw his business grow, I just wanted his playbook to have a shot at it myself.”

Dalai knew that Mick had no prior experience in excavator operating and maintenance at that point and she joked that “well if you can do it, surely I can do it” so she mounted a campaign for Mick to franchise the business to her.  “Yeah I had to pressure him for six to twelve months to let me do it and have my Diggermate franchise on the Sunshine Coast,” she explained.

“He initially didn’t want to do it because he kept on saying “Nah this is just about making some cash and doing very little work, if I franchise it out I’ll have to build all these systems officially and it’ll be a lot of work”.  Dalai wouldn’t take no for an answer though “I also wanted to make some cash for doing very little” and kept on finding reasons to turn up at his house and eventually cracked Mick to start franchising and kicked off her business in November 2016.

Reaping the Benefits And Managing The Demand

So was it worth the wait for Dalai? “Hell yeah, its so awesome!”. And even after four years, her motivation for running the business is burning strong.  “I’m the type of person who gets sick of things quickly and I move on to the next thing. But I still love this business and really just want to keep running it for a long time.”

With the permission of her friendly neighbours, Dalai still runs the Diggermate franchise business from her house and she operates three machines and turns over upward of $10,000 per month. There was a period where Dalai dropped back to two machines just to simplify her life even further but has since gone back to three machines

“I had one machine out on full time hire for a full year which was crazy good. When I got it back, it was time to sell it as the hours were getting up. I sold it and spoke to Mick and explained that I just wanted to run two machines for a while and see what impact that had on my business. I dropped down a few thousand dollars a month with two machines, but the demand was too high by that stage to stay just operating two machines so now I’m back to 3 machines.”

The daily routine for Dalai these days is to wake up in the morning, go outside to hand over machines while the kids are having breakfast inside. Once they are gone for the morning, she can get the kids off to school and get on with the rest of her day.

When asked if it really takes her only one to two hours each morning to run the business she excitedly told us, and holding back her laughter “NO WAY, I seriously spend 25mins out there in the morning doing hand overs and that’s it”.

Dalai also has the benefit of husband Damo who enjoys helping out in the evening preparing the machines ready to go out in there morning… but she cheekily admits she doesn’t count that time….

Sign up here to get more details on how to become a Diggermate Franchise Operator.