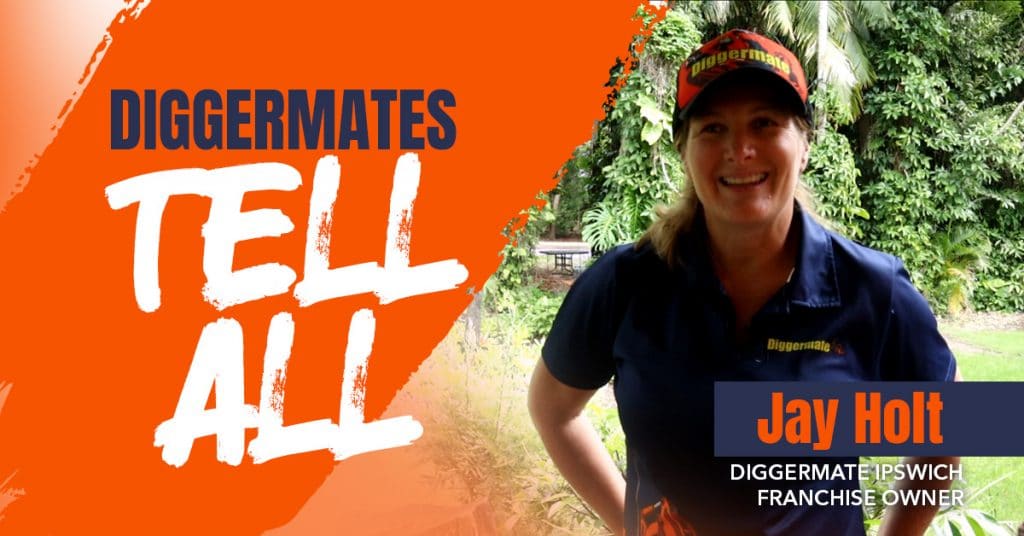 In this video, franchise owner Jay Holt tells all: how they found Diggermate, their initial concerns, the journey so far, who she would recommend Diggermate to — and more!

What were your initial concerns about Diggermate?

My initial concern was that my husband was so keen on something that he kept hounding me to venture into a business. We’ve had businesses in the past and [I said] “that’s it, no more” because generally, I’m doing all the work.

So when he kept hounding and hounding and hounding,  I finally had a look at it, and what made me go into it is after I had a look at it,  I actually thought it was a good business. The research had been done, there was a proven track record, we liked the founder and the foundation of it all, and the journey that actually came with it. So we liked the whole story. You know, the Australian-made story behind it.

What really won us over is the ‘no worries mate’ attitude and the down-to-earth environment.

What specific benefits have you received?

There are ample benefits that we have received so far, from the very start—even with our initial enquiries. There was explicit communication, there were expectations,  it was laid out in very clear communication. After that, when we thought we were a bit overwhelmed or scared somewhat, you know jumping into a franchise again. We actually just got on the phone, and we hassle this wonderful lady called Dalai. She actually just calmed our nerves and all the rest of it. She actually said everything’s gonna be alright and again: communication.

Communication was certainly the big benefit that we’ve got. It was open. It was honest. We were very fortunate with that, and we’re very appreciative of that. The other benefit we’ve got is the unique support that we have from the support team. If there is something to do with maintenance, or if there’s something to do with marketing—if there’s something that’s not going right with an IT question, they seem to know the answer. So we get it back pretty quickly, so it’s been good. The big benefit is our extra revenue and the new little skill set that we have with our Diggermate little machine, so it’s really good.

Who would you recommend Diggermate to?

Absolutely anyone and everyone and I have actually seen some conception of our involvement. Because it is an easy process, it’s a proven record. It’s actually something that is just growing and expanding and we’re really excited beyond the ride with it. So we would encourage any of our friends to do it as well.  If we are trusting it then we encourage everyone else to as well. We’re very excited as to what Diggermate can become.

Previous Post
Diggermates Tell-All: Neil and Bec Williams
Next Post
Get Your Dream Fleet With Credit One